If you have Windows 7, a Dell Precision Laptop with nVidia Quadro 1000M or 2000M with Optimus enabled and your brightness is not working…add this registry key and restart.

Back in the LCS and OCS days, you could have a status called “Appear Offline” which allowed you to function if you were online, but people wouldn’t know it. 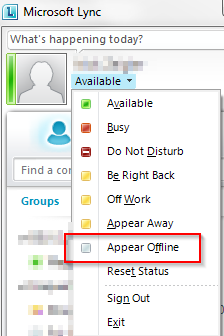 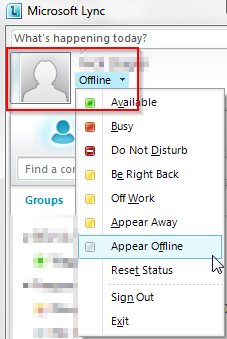 The Department of Homeland Security is recommending Windows users uninstall QuickTime 7. https://www.us-cert.gov/ncas/alerts/TA16-105A This is because Apple ended support for Windows QuickTime on 4/14/16, no more Windows QuickTime updates will be released, and two vulnerabilities have already been published on Trend Micro’s Zero Day Initiative website.

Apple has been deprecating the 11 year old Windows QuickTime 7 for a while, and last January they killed the Windows QuickTime browser plug-in. This forced Window’s users to find another method for playing QuickTime content in their web browsers.

Windows QuickTime 7 can be uninstalled by navigation to Control Panels, then selecting Programs->Uninstall a program. Select QuickTime, then click Uninstall.

Windows QuickTime required for Windows Adobe CC
The Adobe Creative Cloud Support Team has announced that uninstalling Windows QuickTime 7 will break some features in the following Windows Adobe Creative Cloud apps: Photoshop, Lightroom, After Effects, and Premier Pro. “Unfortunately, there are some codecs which remain dependent on QuickTime being installed on Windows, most notably Apple ProRes. We […] have no estimated timeframe for native decode currently.” http://blogs.adobe.com/creativecloud/quicktime-on-windows

Windows Creative Cloud users should evaluate their workflow before uninstalling QuickTime 7. The fact that Apple has already killed the Windows QuickTime browser plug-in minimizes the risk to Windows users, preventing a simple drive-by exploit. The two known Windows QuickTime vulnerabilities would require the attacker to convince the victim to download a maliciously crafted file and opened it in QuickTime.

Advanced Technology Solutions is a national group within All Covered. The team is comprised of a wide variety of subject matter experts focused on creating unified standards, best practices, processes - and applying them using technology.

Looking for the JK Buzz?

John Kirn joined the ATS team in 2015, and he is now posting Apple/Mac content here. All content from his JK Buzz Mac troubleshooting blog has also been moved to the ATS blog. View the Apple/Mac category to only see posts from John.

Permission is hereby granted, free of charge, to any person obtaining a copy of this software and associated documentation files (the "Software"), to deal in the Software without restriction, including without limitation the rights to use, copy, modify, merge, publish, distribute, sublicense, and/or sell copies of the Software, and to permit persons to whom the Software is furnished to do so, subject to the following conditions:

The above copyright notice and this permission notice shall be included in all copies or substantial portions of the Software.

THE SOFTWARE IS PROVIDED "AS IS", WITHOUT WARRANTY OF ANY KIND, EXPRESS OR IMPLIED, INCLUDING BUT NOT LIMITED TO THE WARRANTIES OF MERCHANTABILITY, FITNESS FOR A PARTICULAR PURPOSE AND NONINFRINGEMENT. IN NO EVENT SHALL THE AUTHORS OR COPYRIGHT HOLDERS BE LIABLE FOR ANY CLAIM, DAMAGES OR OTHER LIABILITY, WHETHER IN AN ACTION OF CONTRACT, TORT OR OTHERWISE, ARISING FROM, OUT OF OR IN CONNECTION WITH THE SOFTWARE OR THE USE OR OTHER DEALINGS IN THE SOFTWARE.

Theme by Anders Noren — Up ↑